• One-click Lockdown. Sophos Server Protection is the only solution that achieves lockdown with a single click, securing servers in a safe state. Sophos automatically scans the system, establishes an inventory and whitelists applications. It then locks the connections between applications and associated files, such as dll, data files and scripts. During the lockdown process, Sophos automatically creates trusted change rules to ensure only trusted sources or processes can update the whitelisted applications.

Historically, some of the most prolific virus families (e.g., Netsky or SoBig) distributed themselves as file attachments in email. These families relied on users double-clicking an attachment, which would run the malicious code, infect their machine and send itself to more email addresses from that computer.

Nowadays, hackers have changed their focus and mainly use the web for malware distribution. They still use email messages, but mostly as a way of distributing links to malicious sites, not for carrying malicious file attachments. However, even today some malware families use email distribution to run malicious code on user machines.

•  SPX Encryption. Sophos patent pending simple SPX Encryption is transparent, simple and requires no changes to user workflow. It doesn’t require clumsy and expensive key management or additional software. SPX Encryption simply encapsulates the email content and attachments into a secure encrypted PDF that can’t be hacked or cracked. It allows users to view their encrypted email anywhere: in their preferred email client, in their webmail or on their mobile device.

• Simplify mail management. Reduce workload with streamlined management console and managed appliances that offer the best of an on-premise appliance with a managed service. Client gets automated updates and Sophos monitors customer appliances remotely to ensure everything’s running as it should.

• Flexible deployment options. Choose from a variety of hardware appliance options or “VMware Ready” virtual appliance. Simple integration with Microsoft Active Directory and eDirectory will have solution up and running with just a few clicks.

Sophos PureMessage for Microsoft Exchange guards against e-mail threats such as spam, phishing, viruses and spyware. It controls information sent and received both internally and externally and protects a company against the loss of confidential information or inappropriate use of the email system.

It provides the following features:

• ​​​​​​​ Activity monitoring – Administrator can quickly view the status of servers, email throughput and quarantine areas, via the email security dashboard and activity monitor.

• Customizable policies – Sophos policy engine allows you to set email policies to be configured for a specific email direction - inbound, outbound and internal.

• Keyword search – Define policies to search for phrases or regular expressions within emails and attachments, including all common office file formats.

• Secured information – Take advantage of consistent email policy enforcement. Prevent confidential or sensitive information from being accidentally or maliciously emailed outside or within your organization.

In recent years, backing up virtual servers has been another source of headaches for backup administrators. When server virtualization first gained mainstream acceptance, the backup process had a lot of catching up to do. Most backup applications were not virtualization aware, and backup administrators were only beginning to understand the ways in which virtual environments differed from physical server backups.

Initially, most backup administrators chose to back up virtual machines by deploying backup agents to each individual virtual machine. Ultimately, however, this approach proved to be inefficient at best. As virtual machines proliferated, managing large numbers of backup agents became challenging. Never mind the fact that, at the time, many backup products were licensed on a per-agent basis. Resource contention also became a huge issue since running multiple, parallel virtual machine backups can exert a significant load on a host server and the underlying storage.

For that reason, virtual server backups can experience severe bottlenecks when using traditional backup methods that copy data from each virtual machine (VM) as if it were a physical server.

The answer here is to avoid backing up data from the guest VM and instead to deploy backup applications that can copy directly from the host using backup-specific  application programming interfaces (APIs).  One benefit of running host-based backups is that traditional backup agents can be eliminated, removing a whole set of maintenance and management tasks needed to keep the agents up to date.

Veeam Backup & Replication is an availability, data protection and disaster recovery solution for VMware vSphere and Microsoft Hyper-V virtual environments of any size and complexity.

To provide the most comprehensive protection of your virtual infrastructure, Veeam Backup & Replication complements image-based backup with image-based replication. You can backup any VM, VM container or VM disk, as well as replicate VMs onsite for high availability (HA) or offsite for disaster recovery (DR), across local area and wide area networks.

By leveraging the latest technological advancements of the virtualization technology, Veeam Backup & Replication delivers unprecedented replication speed. It provides near-continuous data protection (or near-CDP) at a fraction of the cost of traditional CDP systems. You can capture changes and update VM images as often as every few minutes as the replication job can be set to run continuously.

• SureBackup. Verify recoverability of every backup by starting and testing VMs directly from VM backups in an isolated environment.

• Restore guest OS files.  Recover a file from any guest OS and file system directly from an image-level backup—without booting the VM, and from virtualized applications with Veeam Explorers for Microsoft Active Directory, Microsoft Exchange, Microsoft SharePoint and Microsoft SQL.

• On-Demand Sandbox. Run VMs from a backup in an isolated Virtual Lab for testing or troubleshooting. 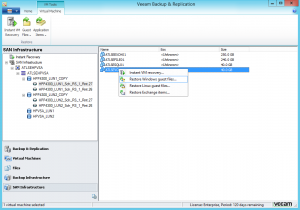